I've been at it again. Here is my latest building project: a stanchion for the cow. 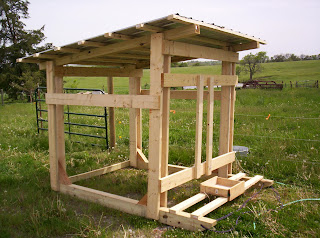 It is movable, set on runners, so that we can tow it around with the truck to a new location as needed. And, except for the metal roof, it was constructed entirely by yours truly.

I'm just a teeny bit proud of it. Doesn't it look so professional? I found a picture on the web of something like it and knew that was what I wanted to make. There were no instructions, however, so Don and I just scratched it out on paper and I went to work.

Annabelle was a little freaked by it at first. She was fine as long as the food lasted, but then would dance and tug until I finally gave up and let her out. Today, though, she danced only a little and then just stood patiently. We were able to drain all four quarters for the first time. I'm sure Burt wasn't thrilled about that, but I was. My hands are still working on building up milking stamina. It's a weird set of muscles that are used for milking. 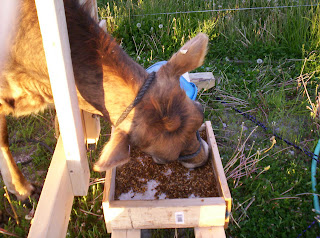 And as an aside, we are having issues with the flavor of the milk. It's a hard-to-describe flavor, but it isn't enjoyable. I have to chug it down in order to drink it. I've read that the spring flush of grass can cause a weird flavor and so I'm hoping that works itself out too. I'm trying to continually improve any sanitation lapses in the hopes that it will improve the flavor as well, but I'm out of ideas in that area. We sure didn't get a cow so that we could muscle down the milk. For now, the chickens are getting lots of milk. They don't seem to mind. Of course, chickens will also dig through cow pies to eat the fly larvae, so they aren't exactly a great judge of flavor. 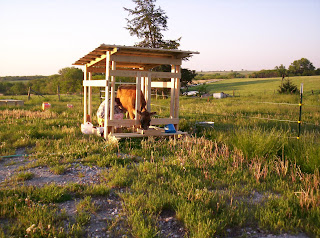 And now, for the record, a little info about the stanchion. If you aren't interested in how it's built, then by all means, stop reading. That's all there is for the rest of this post. But since I had to try to work it out from looking at a picture, I figured I'd try to make it a little easier for the next guy.

Supply list:
First, do some wood cutting.
I then created the base. Lay out the 4"x6"s parallel, with the angled parts both to the front. Take the pressure-treated 2"x4"-6' and nail that along the back ends. You'll want it to be flush at the top, but the bottom will be about 2" off the ground since you are nailing it to the 4"x6". Important: this 2"x4" will OVERHANG 1 5/8" on each side of the runner. This overhang will eventually be nailed into something, but for now, it will just hang out. Do not put it flush with the sides of the runner, or your other bracing will not fit correctly.

After fitting on that back piece, lay the other 2"x4"-6's that you have trimmed 3.25" off from. Nail them on so that the ends are flush with the sides of the runner and everything is squared up. You'll want to keep these within the front 2 feet of the runners. 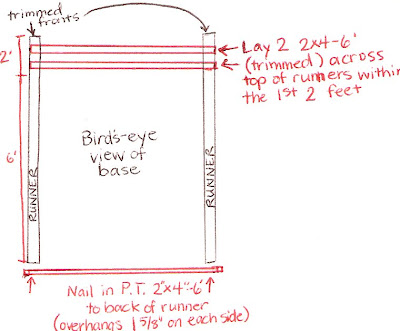 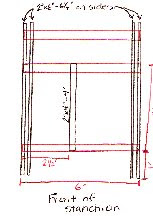 Once the whole front is constructed, stand it up and fit it onto the runners so that the 4 legs fit on either side of the runners, and so that all the cross pieces are toward the OUTSIDE of the stanchion. You will want to place it exactly 6' from the back. I took a 2"x6"-6' piece and laid it on the ground flat next to the each runner on the outside, flush with the back of the runner. This did 2 things: It allowed me to have an easy way to measure and it also elevated the front unit so that it won't drag when the stanchion is moved. After setting it down, I nailed it to the runner and then put 2 of the angle braces in and nailed them in.

Now onto the back. You first need to set up the 4 5.75' pieces of 2"x6" that you cut exactly like you did for the 6.25' pieces. But instead of 3 6' sections across it, you will only use one. It will go on the top, 2.75" down. When you stand this one up to put it on the runners, turn it so that the 6' cross piece is on the INSIDE of the stanchion. You'll also set this on that 6' piece that is still laying on the ground, but it will be flush with the back of the runners. Now remember that overhang of the 2"x4" from the base? That overhang should perfectly cover the legs of the back unit and you can nail through those into the back unit for additional support. Again, put in the angled braces and secure everything. 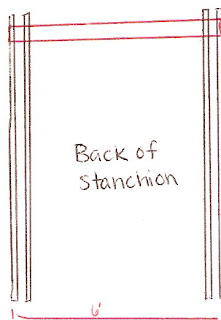 Slide those 2"x6"-6' pieces out that you used to measure and support the front and back and nail those onto the sides of the stanchion. Mine ended up about 4' from the ground, but really, anywhere is fine.

Take your 2 4"x4"-8' boards and fit those into the top, parallel with the runners. They will be supported by the front and back 2"x6"s that were placed 2.75" from the tops. Secure them with nails.

Then take your 7 2"x3"s and nail them across the top into the 4"x4"s, spaced evenly. I toe-nailed them in, as well as nailing straight down, because we have some wicked wind around here and I didn't want the top flying off. Attach your metal roofing. 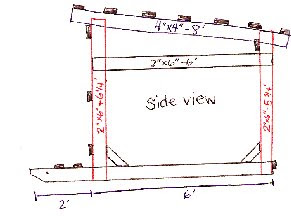 Back to the front, you need to put in the other side of the head gate. Drill a 5/8" hole through the bottom of that last remaining 2"x4"-4' and through the front's bottom 2"x6" so that when you attach the two together with your bolt and stand the 2"x4" parallel to the other side of the head gate, it will accommodate the cow's neck, but not allow her to pull her head through. Mine was approximately a foot apart, but it could easily be closer. Once you have the holes drilled, put in the bolt, washers, and nut to secure it. Then, stand that side piece upright and drill another hole directly to the left, or outside, of it. You'll need to find something to stick through that hole to hold the headgate arm in place. I used a big long bolt that was lying around. This worked wonderfully as it had a head to prevent it from going straight through, and sticks out far enough to prevent the arm from moving. You will want to determine what you'll use before drilling the hole so that you can make the hole a good diameter. You want it easy to insert and remove, but not so easy that it just flops around.

Now, I will admit that the first few times I had her in there, she danced around so much and pushed and pulled on the headgate so hard that she was able to jiggle that long bolt out and made her getaway. I figured I'd have to reconfigure things a little, but 4 days later, she's relaxed enough that it is no longer an issue. You could put a nut on the end to prevent it from slipping and I think that would work fine. Or, I thought about using some wire to hook over the top of the arm. Anyway, once the cow is used to the stanchion, the bolt alone seems to be sufficient.

The 2 2"x4"-6's that lie across the front of the runners created a great place to put a feed bucket. I decided to use some scrap wood to make it a permanent feedbox. The bottom lifts out so that it can be cleaned and emptied. You could probably just set a big rubber feed dish there, though. Hammer a nail or two through it if the cow's big 'ole tongue pushes it around too much.

That's it! It's really an easy build. I'd be happy to answer any questions or clear up anything that I've described poorly. Just leave a comment and I will either email you or post a reply comment.
Gina at 12:25 PM